The summer before I went into second grade when I was seven years old, I decided to make a movie to show at the art show and fundraiser for Oceana I was having in the fall. I wrote a story about the Trash Monster taking over the ocean and all the sea creatures fighting against him. I got my friends to help do the voices for the different characters, my dad recorded them in his studio, and my mom set up the camera and helped me put it together on iMovie. I decided to write a book of the same story using still photos from the film.

The book was named Book of the Month by A&I Fine Art and Photography, and is in its third print run. It has been read by children throughout the USA, as well as in Canada, Guatemala, Switzerland, French Polynesia, Bonaire, Italy, France, England, South Korea, and Guadeloupe.

All the proceeds have gone to support the efforts of Oceana to save our oceans and fight the Trash Monster. 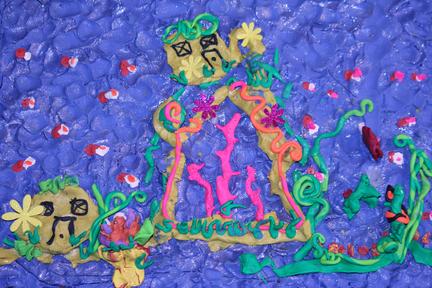 Watch the Trailer
Art to Save the Sea
Buy the Book

Save the Sea from the Trash Monster!

A book and claymation film